The first time Officer Patty Retsinas marched in uniform in the Toronoto Pride Parade, it was a turning point for her. She felt acceptance from the community as a police officer and as a queer person. This was a liberating moment for someone who had dedicated most of her life to fighting crime and fighting for acceptance.

But not everyone feels the same. Starting in 2016, Pride Toronto disallowed uniformed officers to march in the parade, citing harrowing tales of police brutality and harassment of marginalized groups, specifically people of color and the transgender community. Uniformed police officers can be viewed as a threatening presence at pride events.

At a moment when tension towards the police is running high, what is it like to be both gay and a cop? How do you humanize the person behind the badge?

A day in the life of a queer cop

A new documentary, Coming Out Cops, aims to bring awareness about the lives of queer-identifying cops. For Officer Retsinas, being a cop is an important part of her life, but it is only one aspect of her. “People identify me and other off duty police officers by the uniform,” she says. “That’s not my identity, it’s my career. My lived experiences as a police officer, as a women, and as a queer person have helped shape who I am today.”

The documentary, which is still in production, is being done in partnership with the queer members of the Toronto Police Service (TPS), the Ottawa Police Service, and Serving with Pride, a network for LGBTQ2+ officers. The film explores what it means to be LGBTQ2+ as a police officer in Ontario and discuss the movement to ban or minimize police presence in the parade.

“Queer cops are human and we want to humanize the people behind the uniform,” Officer Retsinas explains. “We are in this together with our community. Police officers come with lived experiences and we want to do our part to make things better as a whole.”

The danger of being outed

Part of humanizing the people behind the badge is hearing their coming-out stories featured in the documentary. Sadly, Officer Retinsas’ story involves an outing that she did not consent to — and one that epitomizes a violation of privacy.

Coming out of the closet in the 1990s when an officer begins his or her career, is different than it is today. There were almost no openly gay officers on the Toronto police force. Gay officers stayed closeted for fear of discrimination, homophobia, and potential marginalization from their families and community at large.

The ability to choose when and how to come out was robbed from Officer Retsinas by one of her sergents. He outed her in front of her colleagues by calling her a “dyke.” This was painful for her, but she wasn’t going to backdown. She brought a formal complaint against that colleague even though she knew that she could face ostracism and criticism for breaking a code among officers.

It is those type of stories which bring people together, and Officer Retsinas uses her experience to help those in the law enforcement field become more understanding and accepting of the LGBTQ2+ community. Officer Retsinas says she hopes her work and contributions as a co-producer of the documentary bring awareness to the situation and promote reforms in policing, corrections, and criminal justice, and change the system for the better by breaking down barriers.

Officer Retsinas acknowledges that there is work to be done. First, police departments have to rebuild the trust with the LGBTQ2+ community that has been lost over the years, starting from the top down, with everyone from the chief to officers on the beat. Police officers should be educated in the history and issues that have plagued the LGBTQ2+ community for decades. It is especially important to learn about historic cases of police brutality and harassment of marginalized groups such as the transgender community, most notably the case relating to Bruce McArthur and the outrage many in the LGBTQ2+ community expressed over the way law enforcement handled investigations surrounding his mass murder spree.

“Trust is earned,” Officer Retsinas says. “Regaining the trust of transpersons will come when the police as a whole understand, respect, and respond appropriately to their needs. And that means having a lot of conversations through personal interactions, listening, and being visible.”

One aspect of being being visible for Officer Retsinas is to regain the ability to march in the pride parade to show both the police force and the public that gay cops stand up to discrimination. “We (gay cops) are not part of the problem,” she argues. “Even if we are there in uniform and participating in the parade, we are not there to ‘police.’ We are there for a different reason, not to pose a threat.”

Education and awareness can help agencies better understand and build bridges with their LGBTQ2+ communities and support their personnel to be out in the workplace.

For more on the upcoming documentary, visit Coming Out Cops. To hear more from Officer Retsinas, check out our webinar, A House Divided: Pathways of Remediation for the LGBTQ2+ Community and Law Enforcement, for a conversation about the complex relationship between law enforcement and the LGBTQ2+ community in today’s environment. 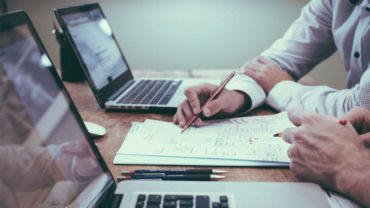