Another way to look at the legal market’s optimism is by looking at the growth of lawyer full-time equivalents, which have returned to pre-pandemic levels

When the Peer Monitor Index recorded its highest score since 2006 in the fourth quarter of 2020, it showcased the resiliency of traditional law firms and how many firms had successfully implemented measures to preserve profitability in an uncertain market.

Some will argue that these measures were overdone, but a year ago in March 2020 — with the pandemic already leading to a worldwide lockdown — large law firms would have welcomed to err on the side of greater profitability for 2020 than on the side of not doing enough. Hindsight is always… well, 20/20.

The legal industry saw average profit per equity partner growth of 11.5% in 2020. Indeed, another way to look at the legal market’s optimism or pessimism about future work is by looking at the growth of lawyer full-time equivalents (FTE). In 2018 and 2019, the large law market finally showed consistent demand growth of 1% in both years, after fluctuating between contraction and growth for most of period between 2011 and 2017. This slight positivity allowed firm management to be more bullish on future prospects, which directly lifted results in Q1 2020, when lawyer growth grew by 2.7% on average. This was one of the quickest paces seen since the aftermath of the Global Financial Crisis.

Looking into the past, we see that lawyer contraction lags demand shortfalls, which was the case in years 2008 to 2010, amid the Recession. The low point in quarterly contraction for demand was in Q1 2009, while the low point in headcount contraction happened in Q4 2009, three quarters later.

Jump to 2020, and we see demand hit its low in Q2 2020. Due to the accelerated hiring pace during the six months preceding March 2020, year-over-year metrics did not reflect contraction in lawyer headcount until Q3. A deeper look at the data, however, suggests that the low point for lawyer contraction may have happened before then. The next chart is atypical to normal Peer Monitor reporting of year-over-year metrics, but illustrates some clearer insight into the extent of these FTEs reductions and the ensuing rebound. We looked at the average amount of lawyer FTEs at a firm in January 2020 and then marked the change as the year progressed. 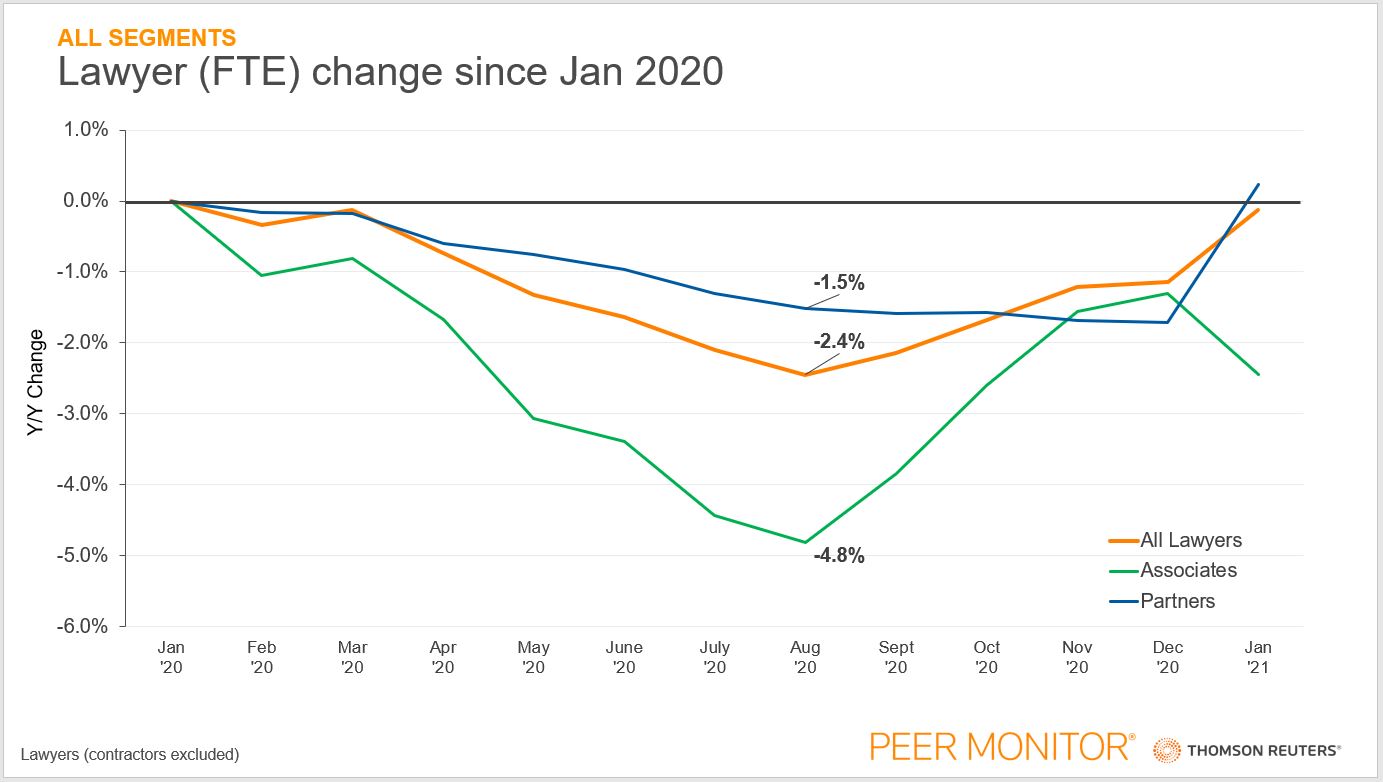 As seen in this comparison, August reflected the largest contraction of lawyer headcount during 2020, with the average law firm employing 2.4% fewer lawyers than it had in January, just seven months prior.

Splitting that out by title shows that associates experienced greater reductions, 4.8% contraction; while partners on average were down at only one-third of that rate, at 1.5%. In the last four months of 2020, however, the results were surprising.

The number of associates climbed back toward to January 2020 levels, while the number of partners continued to trend lower. In November and December, for example partner FTEs had their greater levels of decline since the beginning of the year.

The fact that this divergence between partners and associates reversed itself in January is notable, but unsurprising given that more partner promotions are par for the course every January, resulting in an increase in partner ranks and a corresponding decrease in associates as some have been promoted for their achievement.

Overall, the average number of lawyers employed at a law firm was 0.1% less than it was the January prior, indeed reflecting a strong recovery. Further, we have even seen the average midsize law firm actually grow its headcount by 0.8% in the first month of this year.

Yet, why was the rebound in lawyer growth quicker this time than in the previous 2008-‘10 crisis?

The answer is likely in the level of demand for legal services. In the years 2008-‘10 we saw eight consecutive quarters of legal demand contractions, averaging 3.6% declines per quarter. While in 2020, the recovery was quicker: Q2 saw legal demand contract 5.9%; Q3 saw half of that contraction, down 2.4%; and then demand was nearly the same in Q4 2020 as it was in Q4 2019, down only 0.3% on average. While it might be shortsighted to claim that any legal demand contraction is over, if we add in the recovery in lawyer staffing, the numbers are definitely trending in a positive direction.

The return to hiring lawyers has already begun, mainly because law firms reacted quickly to demand shortfalls at the outset of the pandemic, unlike during the previous crisis. As a result, the duration of lawyer cuts was less severe — though this is because the length and depth of the contraction in legal demand was less severe as well.